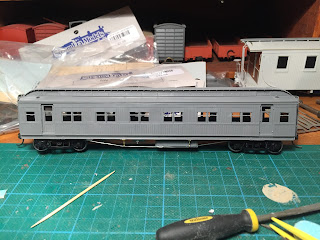 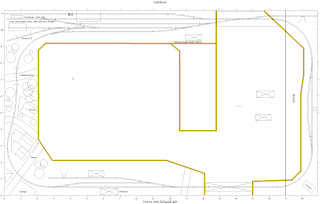 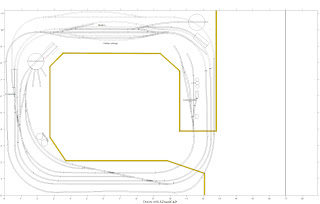 Its been too long

Where do I start, its been 5 years since my last post and I have no excuses , except I'm sorry.
A lot has happened in those five years, I've moved house twice, bought a project C3 Corvette to restore and watched all my model railway gear gather dust whilst its been in storage.
The layout I had has gone and I've started to plan a new one for the spare room I will have once No1 son moves out but they tell me these days they don't move out? I don't even have an area where I can sit down and model in our current home as it too is to be in the spare room as part of the grand plan. So really I have nothing I can offer at this point model railway wise to keep yo all amused.
I can however offer a few photos of the Corvette in progress if that will do.
This has basically kept me away from model railways for the last 5 years.

Ken and I got together last night and with the bits we have so far from AMK. The NBH now has seating for the passengers and is nearing completion. 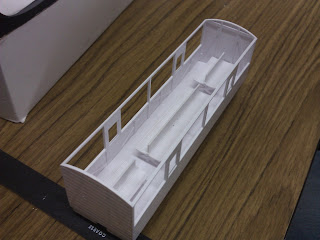 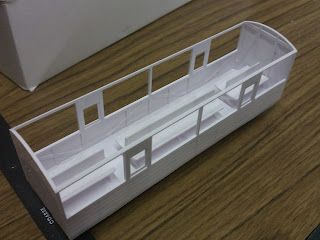 We are over the moon with the level of detail the milling process can achieve. Bogies are our next hurdle and at this stage they may also be milled from abs with brass pin point bearings.

Have fun and happy modelling

I have another update for the NBH kit as AMK engineering are pressing ahead at full speed with the components for the kit.
Below is a photo of the first sample of the seats for the NBH, that are based on the original design from the VR plans.
The legs cross at the corect angle as well as being checked out to fit correctly as per the prototype.
I have glued some scrap abs to the short or end seats so it can sit straight as these will be glued to the end of the car body. 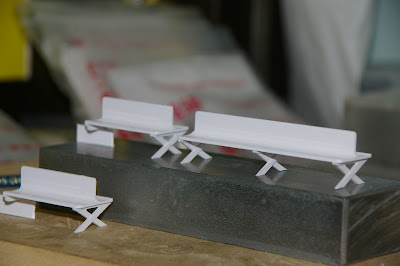 ﻿
What is hard to make out is the slats that have been machined into the seat base which the next photo will show.
﻿ 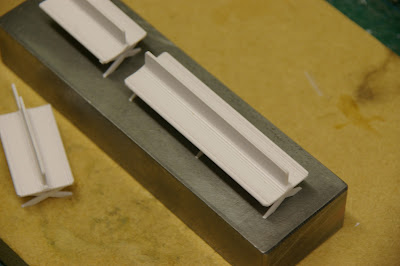 ﻿
If you want to be a rivet counter, don't bother as it has the correct number of slats as per the drawings and photo's of the few original ones at puffing billy.
Regards
Ollie﻿
Posted by Wayne ( Ollie ) at 10:16 PM No comments:

Just a short note to show some of you who might be interested in an up and coming kit for the VR Narrow Gauge On30 NBH excursion cars. It is being milled in ABS plastic and from what we have so far, well I'm impressed. There is still alot of work to do and parts to be made . Below is a couple of samples. 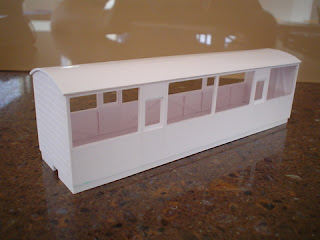 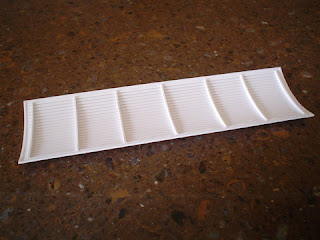 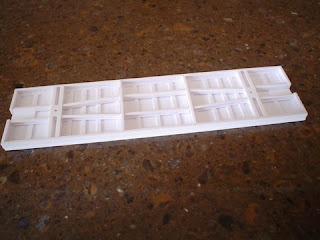 NBH floor
It's very early but as you can see the detail is very nice.
Regards
Ollie﻿
﻿
Posted by Wayne ( Ollie ) at 10:52 PM No comments:

Whats lurking in your backyard

Hi all,
Well as the title says what is lurking in your back yard.  Recently I was privy to some information that lead to a surprise that is about 75 years old. Located amongst a holiday shack in the beach side town of Ocean Grove was two VR narrow gauge passenger coaches that were part of a complete structure. Now usually a demolition crowd come in and disconnect all the services then set to the house with a claw which completely wrecks the house. This structure being made of asbestos had to be pulled apart piece by piece and fortunately it did as they started to pull it down the coaches were revealed. The demo mob were smart enough to stop proceedings and contact someone who contacted someone else and so on until The Puffing Billy Preservation society had found there way down south and bought the carriage's. 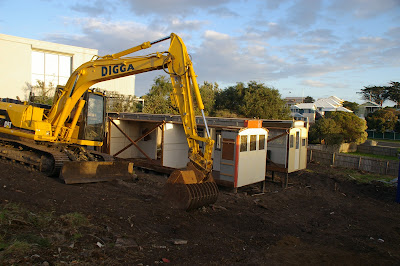 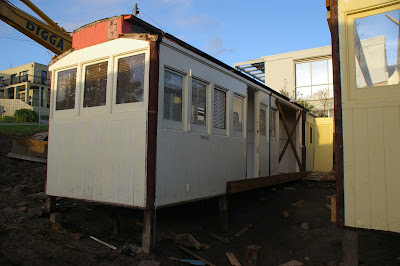 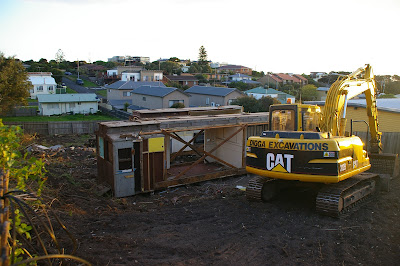 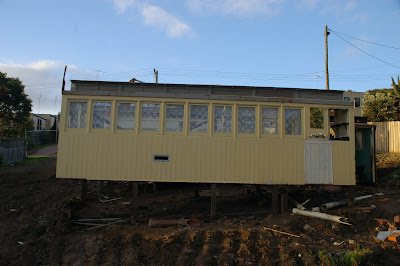 ﻿
From what I can find out so far they came from Colac around 1936 and the house was built around and over the two coaches. The end platform NB is apparently no 6 but it is unknown what the swing door NB is. Puffing Billy have rescued these relics from the past and one day we will be able to ride in them.

"Its been a while"

As the title says its been a while since my last post and to be honest I have little to report, Except that I have been moved into the cupboard of our spare bedroom to allow better access to the study. I was sharing the study with the rest of the family but when the kids had friends over I went into panic mode and was constantly checking my projects that were placed all over the bench in different states of completion. We are fortunate to have a spare room which hardly gets used and after a visit to a mates place he had done a similar thing with his computer etc. I have just got the doors fitted ( now by folds ) and the bench got its final coat of gloss clear this morning. The beauty of this is I can just close the doors and no little sticky fingers even know its there. 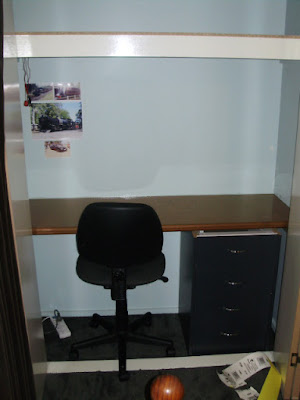 It still needs some shelving but a trip to bunnings next weekend will take care of that problem. I also got inspired by some of the others around to do some work on my own train room and complete the wiring before the insulation and plaster goes in. The outside is basically complete except for the concrete under the veranda, then the platform will be complete. And yes that is a gangers trolley sitting under the veranda which will be placed on its own length of rail in front of the shed to make its really look like a station. 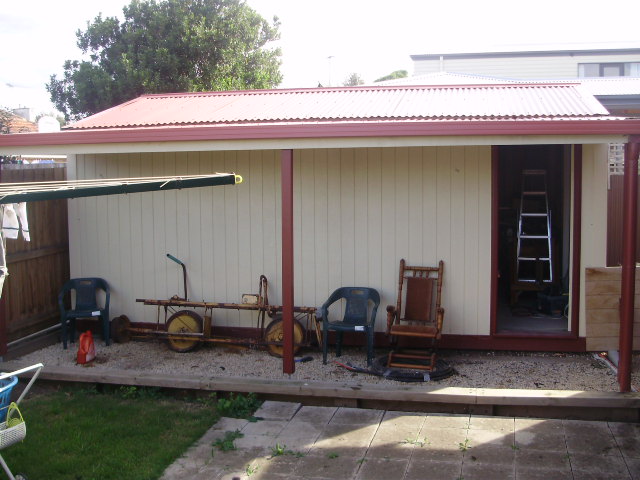 The shed its self is 6mt x 4 mt which is all I could fit in the backyard but with my limited time I realised I cannot ever build a huge empire so I have had to settle for a compromise. I have a layout inside but I'm hesitant to do anything to it as the shed still needs finishing inside. 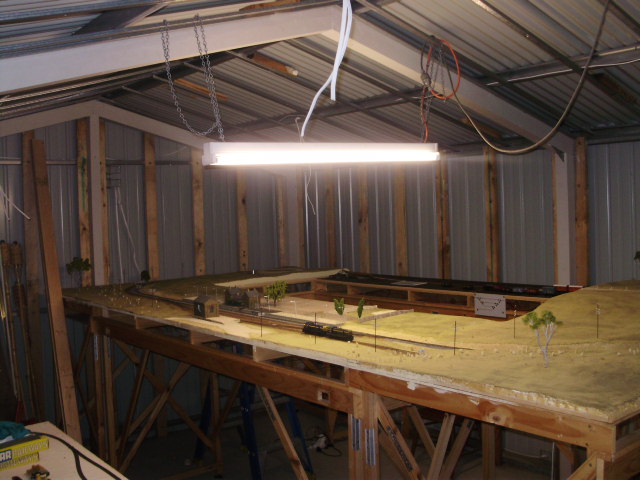 My other passion is road bikes and I have been slowly restoring a Yamaha FJ1100 which had been sitting in a mates shed for 10 years so it has to have every seal and bearing replaced and genuine parts are murder.

That's all for now and I hope to be more frequent in the future.